How To Survive Election Night

On Election Night in 2012, the contest was close — between Barack Obama, who was running for reelection, and his challenger Mitt Romney. The votes for Ohio were pouring in, a state whose loss would be nearly insurmountable for Mitt Romney. Fox News had their journalists and analysts on board, including strategist Karl Rove, who had once been dubbed “Bush’s brain.”

Every network has its numbers nerds, and the ones at Fox called Ohio for Obama. Rove was stunned and had a minor on-air meltdown. Megyn Kelly marched behind the scenes to make sure that the analysts were sure, and Rove continued to insist that the race was too early to call. Finally, he relented when it was obvious that the votes still uncounted were from Democratic strongholds.

Here’s the takeaway. Election Night is stressful. The votes are reported one district at a time. If one candidate has a lead, even a small lead, in well-understood districts, an experienced analyst can look at the winning margins in the known places and you can guess the winning margins in the rest of the state. When the pros call races, it might still look tied to the rest of us. It might even look lost to the rest of us. (This could happen to either party.)

Donald Trump, not known for sportsmanship, is already trying to undermine the election results because he believes he will lose a fair fight.

He knows that mailed ballots are often counted after the polls close. The in-person votes are already known as soon as polls close. So the timeline works out that there will be news (in some states) that “with N percent counted, so-and-so-candidate looks like the winner.”

But this year, one can predict that there will be a difference in the ways Biden voters and Trump voters cast their ballots. For many reasons, Biden voters are expected to vote by mail in a larger proportion than Trump voters. The Trump effort to keep Democrats from voting by mail (or voting at all) might be backfiring, and GOP operatives are working behind the scenes to recover. In some states, tabulating mail-in ballots will occur after the in-person votes are counted.

Enter the new nightmare now described as “the red mirage.” Here’s how it works. Pennsylvania and Michigan voted for Trump in 2016, but they are potential wins for Democrats in 2020. Both of these states have historically tallied their in-person votes before they count the mailed ballots. So what if millions of ballots in Philadelphia, Detroit, and other cities aren’t in the earliest numbers? It will look like a Trump win, prematurely to millions of election watchers, and immaturely to Donald Trump himself.

The reason it might be a mirage is that the closer you get to the end of this scenario, more and more votes would be tallied for Joe Biden. And if the early lead does turn out to be a mirage, the state’s electoral votes will go to Joe Biden. Great outcome, terrible narrative.

In one frightening model, Trump could appear to be ahead 408-130 in an electoral vote mirage when as little as 15% of the vote is counted, only to lose to Joe Biden in a genuine 334-204 landslide.

CNN reporter Marshall Cohen calls it the “blue shift” and uses the 2016 popular vote to make the point:

“The "blue shift" in one image: Election night 2016, Trump won, and is declaring victory. But look at the graphics under Trump. He is leading the national popular vote by ~950,000. That was true at that moment. But weeks later, the final count put Clinton ahead by ~2.9 million.” 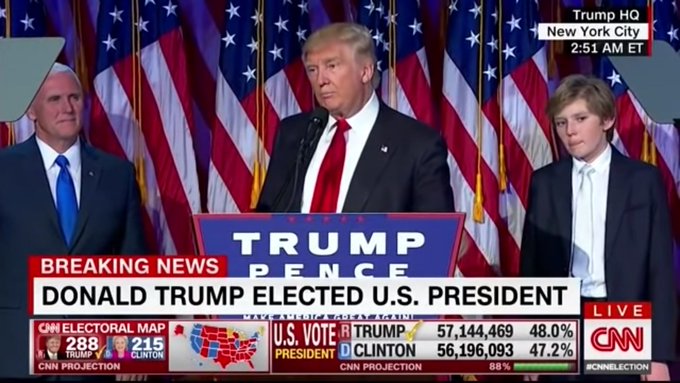 (For a guy who just learned that he’s the President of the United States, Trump doesn’t look all that happy about it in this photo. Even today, he’s still harping on the fact that more Americans voted against him than for him in 2016.)

It seems as though Americans disagree about just about everything this year, and whether to vote by mail is one of those areas. Significantly more Democrats (72%) than Republicans (22%) say that they plan to vote by mail.

Let’s deconstruct this state-by-state. Different states have different rules for ballot counting. Here’s a list, sorted by estimated level of panic from a “red mirage” (or worse, no mirage).

Michigan: More than 2 million Michiganders have requested mail-in ballots, a state record. Relaxed laws allowing no-excuse mail-in voting and fears about coronavirus have already resulted in 1.6 million absentee ballots cast in the August primary, and the state expects about 3 million mail-in ballots in November. The good news? This keeps voters safe and helps keep in-person voting less crowded. The bad news? Michigan doesn’t process or count mail-in ballots before Election Day, although the processing and counting might start before the polls close. It’s a state Trump won in 2016, and he’ll be watching it with great interest and lots of petulance if he loses.

Ohio: Absentee ballot applications were sent to all 7.8 million registered voters in the state, a practice that has been in place since 2012. The state’s official positions on processing and counting timelines aren’t as clear as other states. Ohio’s Secretary of State Frank LaRose, a Republican, has been very proactive in making sure that Ohioans are able to exercise their constitutional rights. For example, LaRose is trying to include postage-paid envelopes with the mail-in ballots. Processing ballots can start before the polls close, but details are unclear as to how early that might be.

Pennsylvania: The state may begin to process ballots at 7:00 AM on Election Day, but valid ballots will arrive to be tabulated for another three days after the polls close. On July 29, the USPS warned Pennsylvania that its ballot mail recommendations did not allow for on-time delivery. In the June 2 primary (1.4 million mail-in votes statewide), for example, in Philadelphia alone, 14,600 completed ballots arrived after the deadline. Some areas were granted extensions, but others were not. Officials warned that voters might receive their ballots too late to return them. For November, an extension of three days will be available for ballots mailed before 8:00 PM on Election Day. That might not be enough for voters who wait until the last minute. Another problem for mail voters is that the ballot will be rejected if it’s missing the inside “secrecy envelope” and the voter is not notified that their vote won’t count. In early returns, that error is discarding about 5% of ballots, probably disproportionately voting for Joe Biden. For what it’s worth, the “blue shift” was worth about 22,000 Democratic votes in the last four elections. Donald Trump won Pennsylvania by 44,000 votes or .7% . This is another state that could make Trump cranky on Election Night.

Wisconsin: Mailed ballots will begin processing after the polls open on Election Day. There’s an ongoing dispute about whether failed third-party candidates should be added to the Wisconsin ballot, and this could result in counting delays if ballot delivery deadlines are extended beyond Election Day. The candidates in question are Kanye West, supported by Republicans, and the new, not-Jill-Stein Green Party entry, supported by the Kremlin. There are other challenges: 23,000 mailed ballots were rejected in the April primary, fewer than 2%, but more than Trump’s winning 2016 margin. With only five polling places open in Milwaukee, lines were long, and it’s likely that some voters stayed home rather than face the pandemic and the rain. The good news? The conservative-controlled state learned some lessons about potential voter suppression. That’s the bad news, too.

processed the day before Election Day

A chart compiled by Charles Stewart III depicts what time various states called the 2016 election. Swing states reporting well after midnight that year included Arizona, Michigan, Minnesota, and Nevada, with Arizona and Michigan described as “later”, which could be a very long time. But the way processing and counting will work for 2020 is different from previous elections and could change later in the cycle.

Associated Press political writer Nick Riccardi (@NickRiccardi) sums it up this way: “Mail ballots will be counted late in MI, PA and WI. But they will be counted early in AZ and FL, which should counterbalance that somewhat on election night.” Arizona must have fixed whatever was wrong in 2016.

Florida political strategist Steve Schale (@SteveSchale) says “We know if we win Florida it’s over. We also know we will know rapidly.” With 2.22 million Democrats registered to vote by mail, their enrollment exceeds Republican mail-in voters by 717,000, an 80-fold increase over 2016 numbers. With no evidence, Trump seems to think that Florida mail ballots are safer than they are everywhere else.

More than 550,000 absentee ballots were rejected during the 2020 primaries. If you are voting by mail, especially if you’re voting absentee for the first time, make sure you get it right. Here are some of the most common problems you might face:

(1) Improperly filling out your ballot

(4) Not including required additional documentation (or the inner secrecy envelope, at least in Pennsylvania)

(5) Sending your ballot back too late

In North Carolina, mailed ballots for the general election November 3 are already being returned.  A mid-September review of returned ballots indicated that Democrats were out-voting Republicans 59% to 12% by mail at that early point. The review also revealed that about 4% of those ballots have errors that can be tracked and fixed with the help of a new system called Ballottrax. Most states will give you a chance to “cure” a rejected ballot. New voters, young voters, and minorities represent a disproportionate number of rejected ballots. You don’t want to find yourself on the cutting-room floor. While we’re looking for a vaccine, it’s a relief to know there’s a “cure” for something.

If you live in Florida, you can help make Election Night an early bedtime. Vote early, whether by mail or in person. If you decide to vote by mail, track your ballot online. Call your friends and help them get their ballot right and track its progress. A Biden landslide in Florida is an early night and almost undoubtedly a decisive national loss for Donald Trump.

If you aren’t a Floridian, watch the polls if you like, but never forget that national leads can tighten. Approval polls don’t matter. And of course, polls don’t vote.

The national popular vote doesn’t count (Don’t believe me? Ask President Hillary, or President Al Gore). To prevail in the Electoral College, Joe Biden needs to win the popular vote within enough states, not in the aggregate, for it to matter. What can you do?

For you, Election Day is the day you receive your ballot. Fill it out with the right ink, seal it, sign it, and send it (or deliver it). The sooner it gets into the system — no matter when your state begins to process or count — the sooner you can track it to learn whether you got it right the first time.

If you get something wrong on your ballot, or if the state didn’t get it for some reason, in many states, you get another chance. Take advantage of that. Get a provisional ballot to mail again or drop off, vote early in-person, or vote on Election Day. Wear a mask. Be heard. Right now, voting for Joe Biden is the most important thing you can do for your country.